Ambush of the Ithilien Rangers 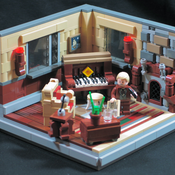 By Dusty-Bricks
8 comments
I tried to build like a Lego set, so I tried to add as many functions (as ludicrous as they may be) to the build.

Also, since Lego already has the licenses to LOTR, I don't think creating this set should pose any problems when it comes to production.

The set itself is supposed to recreate Sam, Frodo, and Gollum's first encounter with an Oliphaunt, and Faramir in 'The Two Towers'.

This video should explain everything else.