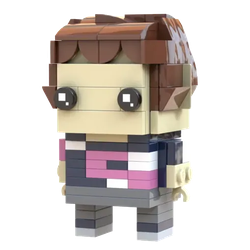 Based on the Nintendo based accessory/toy that came out in October of 1985. With some adjustments from Nintendo's own Super Smash Bros series, R.O.B. is a beloved character in Nintendo's history, and I think that a Lego set for him is long overdue. I am planning on making this Build one of very complex proportions.In that it has many ball joints that can be posed in many ways,it can be placed to be in different positions. and the stick that connects the body to the lower half is also bendable. the build has many bracket pieces,for the LEGO builders that like a bit of a challenge in the sets they build. and im also thinking of making the second version of R.O.B a japan exclusive. Just like the original toy that this is based off of.An homage if you would say, in short with the amount of things that this build has to offer, I think that it would be an amazing pick for the next LEGO IDEAS pick.
25
114
days left