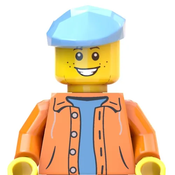 By AlexGdeD
117 comments
Three years ago, I showed my girlfriend's son the favourite cartoon of my childhood: UFO Robot Grendizer! In 1978, this anime from Japan hit France like a Tsunami under the name Goldorak. It won 100% of TV audience that summer! Italy was simultaneously hit, now as Goldrake. The cell animation conveyed important values such as ecology, courage and peace. And love, of course! So I shared the first episodes with the boy, knowing it would pass a good message.
Then... the kid challenged me to build a Lego Grendizer.
I replied "Ah! Ah! That is impossible! I tried when I was your age, and the result was just... super blocky!" Then... I thought about it, and browsed the modern Lego parts range.
After a lot of work, I managed to offer him a unique Grendizer figure to build for his Birthday, two years ago. It was still imperfect (some cheats were needed to hold it together;) but I kept working on it and was finally happy with my creation. Then I designed Mazinger Z (Tranzor Z in the United States) and Great Mazinger, its formidable predecessors! And some baddies to fight with, of course... As well as many other robots by the famous mangaka Go Nagai. I called this my "Lego Nagai Collection" ;)
Today, as I am posting this, we are celebrating the 50th anniversary of the Mazinger saga: the show first aired in Japan on 3rd December 1972. This is the perfect moment to offer my tribute to your appreciation: 10,000 votes can transform this idea into a real Lego set! Support is free, so please hit the yellow "SUPPORT" button if you want to build it, too!
I designed my three Giant Super Robots around a fully articulated skeleton, so they can move with a wide range of movement. They can stay up in any pose, thanks to stud holes in their feet. Each robot is around 20cm tall, and can be fitted with detachable punches, weapons and wings (the Great Booster, Scranders, and Spacers can be presented in ground or flight mode).
I imagined a display stand featuring a striking Z emblem and a storing frame inspired by the Photon Power Laboratory and by the traditional Japanese Torii gates. This is optional of course, as the parts count might become too much! Indeed, the set currently contains a bit more than 2,100 parts, of which a quarter go into the stand. So if this does not get the green light, I designed a variant of Mazinger Z in damaged condition - as seen in the epic last episode of series 1!
You can see some photographs of the real-life models in the gallery, as well as some 3D renderings of my dream set. I perfected some parts like the hips since I took the photographs, and you will notice I used white bricks for the biceps, thigh and abdomen sections. But if Lego could produce the parts in metallic silver, it would be a fitting tribute to the legendary Super Alloy Z legend!
I hope you like this project. Designing it is my kid's dream come true! A dream you perhaps wish to share? So please vote, and let's see if we can turn this into a Giant Super Lego set! Do share this page with your friends and family if you like it!
Oh, by the way: I know Grendizer's Spazer is much too small. But I still haven't figured out how to build it in scale with my robots. Who knows? Lego will release more incredible new parts in the future, and I will be glad to turn them into a perfect set before Mazinger's 60th Birthday!!!
Feel free to share your thoughts and suggestions on this project in the comments section!
Merci beaucoup!
Thank you for your attention!
Greetings from a fellow Lego fan... who is also celebrating his 50th Birthday this year ;)