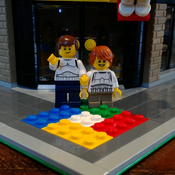 The Wicked Witch is flying her broom into action.  She has convenient storage for her cat and an actual broom.

The Zombie Pirate sails in his micro ship.  He is accompanied by his parrot friend, and for his foes, he is armed with four stud shooter cannons. "Avast ye bilge ridden scurge!"

Join Bigfoot on a trek through the forest in this foot print shaped micro-mobile.  Bigfoot has ample coverage in the foliage, but if he is seen he has a catapult for defense.

There's a Yeti in that igloo!  Yeti looks cool in his rolling igloo, which includes freezer storage in the back for his popsicle.

Each Mighty Micro includes approximately 80 pieces and one minifuigure.