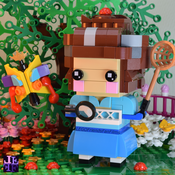 As an experienced aquarist, I know firsthand the amount of time and cash you can devote to a real-life coral reef aquarium.  The cost of equipment and lighting alone can set you back hundreds, if not thousands.

Also consider that importing aquarium-trade fish, corals and live rock isn’t the eco-friendliest activity.  Reefs in some areas of the world are aggressively over-fished for home aquariums.  And, despite the growth in coral fragment aquaculture, most corals are still harvested from wild reef eco-systems.  As a result, coral reefs suffer.

I have to admit, the first version of the 360 Coral Reef Aquarium featured dolphins and sea turtles, which are plentiful in my LEGO stash.  However, these marine organisms don’t belong in an aquarium of any size.  It’s thoughtless to promote them as potential aquarium inhabitants – even in LEGO form.

Proudly display this fully enclosed model at home or in your office, and never scrape algae or clean a protein skimmer again!  There’s no equipment or living organisms to purchase or ever fuss with.

Simply build your new LEGO 360 Coral Reef Aquarium, then let family and friends admire it - from every angle imaginable!

Inside, you will marvel at:

Behold the beauty of nature – and build it with LEGO!

Thank You for viewing the LEGO 360 Coral Reef Aquarium  :-)

Thank You for Supporting, Commenting, Following and Sharing :-)