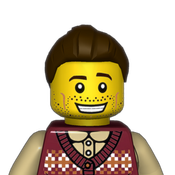 By dirty tree and a terd
46 comments
This is a version of a large delivery truck also called a box truck. It is not based on any specific truck brand although it probably incorporates a lot of styles and looks from many North American brands. I built it from my memory of being around these trucks at docking stations, warehouses, and distribution centres in Ontario Canada. Anyone in the US or Canada, who live around larger urban centres especially, should be familiar with these vehicles. I don't have experience elsewhere in the planet but I suspect this would be similar to other trucks over the world.
Initially I built this to engage my two youngest children in some of the work that their dad was involved with. I thought if I can build components or scenes from where I work, I can interact with my kids on their level and help them to better understand some of the work-stuff dad does. Once I started building it, it soon became apparent to me that this could be much more. I was really enjoying getting into the details of the build and figuring out how to make components and elements work to get the desired effect. I got so much enjoyment out of it, I thought I should share this as an idea for everyone. Once the build was completed, my kids also got to get their fun with it by including it into their city playscape.
In order to be a viable set, I set out to include as many playable components as possible.
There are 444 pieces on this model. It would make a great addition to any imagineer's Lego pile as it includes many pieces and building technics that can be utilized throughout one's collection.

By dirty tree and a terd
46 comments