Guardians of the Galaxy - Baby Groot 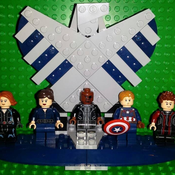 I wanted to make the baby dancing Groot from the end scenes of the Guardians of the Galaxy film.  Everyone loves that seen and knew that I would want it sitting on my shelf as would my girlfriend.

He sits approx 8 and a half inches tall (22-23 cm), he is fully jointed to move in any position as if to be dancing, his mouth opens and closes, and his hair moves a little.

Due to be obviously top heavy, I had to go with a wider base (which is also the bit that could be mostly customised afterwards), but with this wider base he can lean fully backwards (matrix style) and still remain upright.

It was my first use of LDD and spent a few hours playing around with the settings etc, but coming up with this.  This is probably the 4th or 5th version of the model, due to a few noticeable and necessary changes after sourcing the parts and building. There is still more improvements that could be made, but a few of the parts are hard to source from the UK.

I personally think this could make an awesome set for all children's and adults playrooms, office desks, man caves, bookcase and pretty much anywhere you want a cheeky little set displayed.

He is very popular from the first film and depending on the content of the 2nd film in 2017, potentially even more so then.