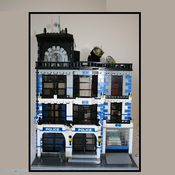 Here we have my Talon Interceptor K-Class & Kestrel B-Class Scout. These are a pair, and work together to intercept other spacecraft.

First we have the main spacecraft:

The Talon Interceptor K-Class- this is an interceptor craft capable of space combat. It is very adaptable and agile. Because of this it can outrun most craft but also stay and fight if it needs to. Features include:

I've put a short video together which shows a bit more of my project so please take a look.