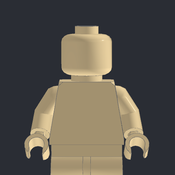 By venom_jl
15 comments
As a life long toy fan, I wanted to put two of my favourite things together. LEGO and Thundercats, so I decided to make the iconic Thundertank.
But just making a replica of the tank wasn't enough. Playability was a big concern for me. Of course it had to look like the one form the 80s cartoon, but it also boasts a mechanism that allows the jaw and arms to move up and down (at different intervals) while pushing/driving it along. As well as moving tank treads!
My Lego Thundertank also considers minifig scale which was important to me growing up building with town and space sets. This vehicle sits 3 minifigs, 2 in front and 1 in the back, manning the fold away canon, that tucks neatly away. Ideally Lion-O would be joined by the other Thundercats as minifigures, Panthro, Cheetara, Tygra, Pumyra, Lynx-O, Bengali, WIly Kit, Wily Kat and Snarf too. In short I believe this would make a great LEGO set because this is a set I would definitely want as a kid.