No Man's Sky: The Monolith 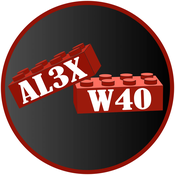 By Al3xW40
20 comments
16 // 16 // 16
What it is:
This is a model of a monolith from the 2016 video game No Man's Sky alongside the starter ship, the Radiant Pillar BC1. The set includes a minifigure version of the game's Traveller protagonist and a Sentinel, which comes with two spare coloured round tiles to represent varying states of alertness. It also includes two Gravitino Balls (valuable and rare resources that can be found on planets). Around the monolith is a slice of terrain similar to a typical planet in No Man's Sky in the shape of the game's logo. In total the model has 761 parts of which all have been in production in the last 10 years.
Why I built it:
I think No Man's Sky is an excellent game which deserves to be made into a Lego set, with a complex storyline and stunning visuals. In my opinion, this model both catches the eye and would look good on any fan's shelf or desk. It is not a huge set which means most people who are into both hobbies could find space to display it.
Also, No Man's Sky is a game known for having over 18 quintillion unique planets with their own features and life. It promotes exploration and base building with an infinite number of things to find and create. Similarly, Lego is about designing and interacting with new and original things, and it brings limitless possibilities for creation. I find that these brands have a very similar ethos and so a Lego set of this game would be very complementary.
If anyone has any suggestions of something else to add I will try to implement them.
16 // 16 // 16