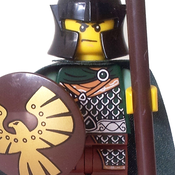 Experience the adventure of the Imperial frontier!

In this modular section of the monumental imperial Wall, imperial soldiers guard the borders of their empire from those that dare to flaunt imperial authority - the barbarians!

The Wall consists of a length of curtain with attached tower. The Wall is fronted by sharp brush and thorns and is high enough to keep barbarians out of the empire. The tower is open to the rear, with the ground floor holding basic stores and with a ladder access to the upper storey, which provides access to a parapet. The top of the tower is open to provide an elevated observation point.

The set comes with 4 figures:

This modular section can be joined to other sections to recreate the great imperial Wall.

The set was built on a 16x32 baseplate and consists of approximately 435 pieces (excluding figures and their accessories).

This set is inspired by the archaeological remains of Hadrian's Wall, though adjusted in scale for economy of bricks and to offer greater aesthetic appeal. Therefore, this set is not a Lego replica of the historic monument, and I wanted to create something that offered more playability and imagination.