LOTR: The Defense Of Osgiliath 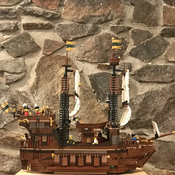 By Lego Designer 3
79 comments
OSGILIATH. Osgiliath was the original capital of Gondor until the Orcs invaded. Gondor then moved its capital to the white city or the tower of guard. In this set, the orcs are invading the city of Osgiliath, sadly the orcs win this battle.
The set. This set is of Osgiliath. In this set, there is a wall, a tower, a smaller structure, two boats, and minifigures. The main wall can easily open in the middle for more room, the tower has a door that leads to a ladder which leads to the top of the tower, the smaller structure with a broken arch, and the two orc boats which have ramps that go up and down.
I built this set because: I think this would make a great set for anyone who likes LOTR or anything medieval. I also think that this is another set that LEGO should have made but sadly didn’t. Anyway I think this would definitely make a great set for everyone.
Thank You!