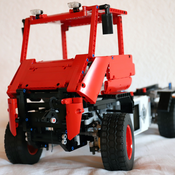 By Tobi-WanKenobi
48 comments
Telehandlers are used in construction and industry to perform demanding material handling tasks.
This is the most-fun Lego Technic model I have ever played with. Whereas cranes, excavators or fork trucks need dedicated objects to move, this telehandler can grip and move lots of objects of daily use. Use it to clean up the mess on your desk or move cups to the right place on the table. Or just utilise it to move the remaining LEGO pieces back into the box in a very pleasant way.
Like its original, this telehandler features four wheel drive as well as four wheel steering. The boom can be lifted and a dedicated 3-finger gripper is suitable to move various objects. Different tools can be mounted. A gripper, a shovel or a fork are just some of the possible tools, each one dedicated for a special task.
It is a showcase of the possibilities of the LEGO Powered UP components.
To give the best possible steering experience, the telehandler is not crontrolled with a mobile phone, but it features an extra cockpit, that comes with the set. A joystick controls the speed and steering. An extra LEGO Technic hub is used in the cockpit to measure the position of the joystick several hundred times per second. This allows precise proportional steering and speed control. To control the boom and the gripper an additional control lever was developed. Tipping the control lever moves the boom up and down, where turning the lever makes the gripper open and close. The boom movements can either be done in manual mode (the boom is moving with the speed in relation to the control lever position), or it can be switched to automated mode. In automated, a short steering impulse is enough to make the boom move to a predefined position (top/bottom). This makes it even easier for the driver, to concentrate on steering of the machine, while the boom is moving automatically to the right position for the next move.
„This is the most advanced LEGO machine I have ever worked with. Its versatility is unmatched and the working comfort is on a next level.“
Bob the LEGO Builder
Make this set become real and support it!