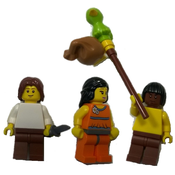 By Cyde59
22 comments
Hello,
4 years ago, I've created for my children a playable version of mysterious cities of gold. Now, I've chosen to build the "Grand Condor".
984 bricks:
The Condor is composed of 984 bricks. I've tried to have a size smaller than the city that was about 3000 bricks. I've defined the size with the cockpit that should contain 6 minifigures (Estéban, Tao and Zia, of course, but also Sancho, Pedro and Mendoza).
Main points:
- The Condor profile has been done with pictures from the cartoon in order to respect the major proportions.
- The condor should be affordable.
- Key elements should be taken in account : the Condor can lower the head, have foot stretched or folded, the wings can take different positions, the back can open, the beak can open, and the cockpit also can open.
- I've tried to respect most of the colours from the cartoon: then I used yellow, dark tan, and gold pearl.
- Some little extras: the cockpit has a joystick with a "cobra", very close to the one in the cartoon ; the roof can be removed, then the minifigures can be played inside the condor.
- To finish it, it took a lot of time because of the difficult shapes, and also because it needs to be string. Most difficult points: to have foot that give the good balance to the bird; to have wings that can be horizontal (when flying) but also make a "M" when the bird is on the floor. It took about 9 months to conceive and about 1 month to make the notice.
Improvements:
- Certain shapes can be really improved, because I have the limits of existing bricks in a given colour. Then we can have easily roundish the shape
- The system for the wings isn't optimal. Perhaps with bricks that can take different position AND keep the positions despite the weight. I haven't found how to do, the result is correct, but need improvements
- To join the cockpit and the roof with a more beautiful solution. It should be a roundish shape that enters another roundish shape
- Perhaps find a system to allow the minifigures to climb from the beak (then a slide system for the joystick).
My proud :
- The 6 minifigures can enter the cockpit.
- The head can lower, and the beak can open within the head.
- The shape with wings deployed is very close to reality.