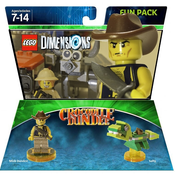 1986. What a year. Shoulder pads, big fluffy hairdos, boom-boxes and arguably the best movie of all time is released…

Yes… Crocodile Dundee. The classic Aussie film that put Australia on the map and introduced the world to Paul Hogan. In 1986 Crocodile Dundee was the second highest grossing film (behind Top Gun… and ahead of Platoon, Aliens and Ferris Bueller’s Day Off) and after 30 years remains Australia’s highest grossing Aussie film of all time. It was Oscar nominated for best writing and Paul Hogan won a Golden Globe for his portrayal Mick ‘Crocodile’ Dundee who gave us the immortal line “That’s not a knife. THAT’s a knife”.

My design celebrates the vehicles in the film that have a great playability and can be used to recreate some of the film’s most famous scenes.

Mick can be seen driving a good old fashioned bush basher. A rusty, thrown together C-1300 Harvester International that sports a dirty canopy that reads ‘Never Never Safari Tours’ in faded script. The truck can be seen at the start of the film where he takes Sue Charlton into the Outback for the first time.

Using the pieces that I have in our Lego collection I tried to emulate some of the main features of the jalopy. The truck has a bull-bar (with attached chain and spotlight), a large exhaust from near the bonnet, a spare tyre bolted to the bonnet, a canopy with support cage, back seats and a tinnie (small boat) on the top.

I have used a range of coloured pieces to give it the old, rusty car look. Ideally I would use more dark red or reddish brown pieces to give a more authentically rusty look. I am in the process of sourcing the colours that I need.

I have made a canopy out of a piece of old sheet that has been stained a dirty brown colour to give it a rustic and used look. If it were to be made into a set it would be ideally made like the cloth tepee covers in the Western themed sets. Any feedback about how to connect the cloth to the windscreen more efficiently would be appreciated.

Mick finds himself in New York City – a fish out of water – Sue’s family have their own Cadillac Fleetwood Brougham Stretched Limousine with driver. The driver, Gus, befriends Mick and the pair share a couple of memorable scenes in the film. My favourite is a scene where Mick is accosted by some unfriendly locals. Quick thinking Gus roars into the scene in the limo – knocking the chief thug to the ground before springing from the car, racing around the back, ripping off the boomerang antenna and whizzing it down the alleyway and collecting the escaping hoodlum.

I have based my limousine on the white version in the Lego City Set # 3222 (Helicopter and Limousine)  – however I have modified it to resemble the car in the film… mainly making it black. I have also extended the boot to better represent the Cadillac limo and make a place for the boomerang antenna. I have added grey panelling to the side and made three side windows. I have to source several black bits that I’m missing from my collection. I (obviously) need black 1 x 8 side rails (4286009), 4 x 4 modified tile (617926) and brackets (4259942) and a 6 x 2 tile for the roof.

Ideally I would love a black boomerang like the blue one that Captain Boomerang sports – Lego piece 25892 – rather than a black corner piece.

A Crocodile Dundee set would not be complete without a Lego Crocodile? So I’ve included a moulded croc as part of the set.

I’ve also included a water buffalo. Early in the film whilst Mick is driving Sue in the truck a large water buffalo blocks the bush track. Mick jumps from the truck and hypnotises the beast who falls to the ground.

The buffalo is a simple design inspired by the bear in the Vacation Getaway Creator set 31052. I think this adds some great playability to the set and besides you get two grey bananas as horns!

I have added three minifigures to this set. I have Mick, Sue and Gus.

Mick would be wearing his quintessential hat… rather than a sheriff star it would require a printing of a hat band with crocodile’s teeth. He would need a printed torso with crocodile skin vest and croc teeth necklace and khaki legs. No Crocodile Dundee minifigure would be complete without a large Bowie knife. I know there is no specific Lego Bowie knife… but if this set gets through – a simple dagger or sword wouldn’t cut it… although a Lego knife (94158) may suffice. It would be a great addition to the Lego weapon arsenal. I would also give Mick a standard Lego rifle (30141) - great for re-enacting scenes of the film. For his head I would use a two sided face giving him a cheeky smile indicative of his larrikin nature and a mean face that represents his casual menace for when times get tough.

Sue would be wearing a white top with black pants – which she wears in the Outback and when she is in New York. She is wearing a hat with hair in my set – but she could equally be hatless with a shoulder length blonde hair-piece. I would give her a camera which she wields throughout the film. For her head I would again have a double sided face. One side with a relaxed, easy going smile and the other a fearful face – for when she is scared in the bush!

Gus would be wearing a black limo driver’s uniform with hat. He would have a double sided face – one with a casual look the other with a more ‘I mean business’ look.

This film is a piece of Australian history - it had a great cultural and tourism effect at the time of release and a Lego set would enable fans, worldwide, to re-connect with a great film, introduce a new generation to the film and give the Lego community a great set and minifigures.

There hasn’t been a real Australian Lego set since the Outback series in 1997. This set would change that.

Lego has an established relationship with Paramount pictures the film’s distributors – the Lego Dimension Mission Impossible set was their most recent collaboration and this set could continue that relationship. Hey – maybe we could get a Mick fun pack into Year 3…

The set has great playability with the vehicles being of a similar size and scale to other Lego City vehicles and are of a similar design.

If you are not familiar with the movie or its vehicles please Google it and have a have a look at the film – there are guaranteed laughs and it holds up!

Thanks for supporting my design. Any feedback or suggestions would be greatly appreciated.