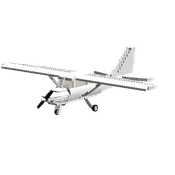 By Dinos_05
27 comments
The Cessna 172 is one of the most popular single engine, four-seater aircraft.
It is one of the most successful aircraft of its time, since 2015 more than 44000 Cessna 172 aircraft have been built.
My LEGO model is based on this airplane. It consists of approximately 550 pieces, and it features a detailed interior, cockpit and has seating for four minifigures.
It also has a detailed engine bay (as shown in the pictures below) and working ailerons.
The interior is easily accessible by removing the wings.
Overall, it is a playable LEGO model and since it replicates a very popular aircraft, it would make a great LEGO set.