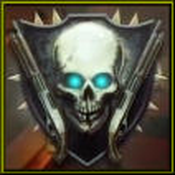 Presenting the LEGO version of the 2012 TMNT Patrol Buggy (MKII):

The Patrol Buggy is a vehicle used by the TMNT. Built by Donatello, it is actually four separate vehicles that can be attached or detached as needed.

Despite their Go-Kart-like appearance Donnie dislikes it being referred to as a "Go-Kart". The Buggy is equipped with grappling hooks and a supply of caltrops to shred an opposing vehicle's tyres.

This vehicle debuted in the episodes Panic in the Sewers & later featured in Of Rats & Men.

This LEGO interpretation has the following features.

Seats all four Turtles with shells on.

Storage clips for all the Ninja Turtles weapons.

The four "Patrol Buggies" can be connected into any configuration you wish.

Drive them as a chain or in a row four across.

Each Buggy comes with its own personalized feature for each individual Turtle.

Leo gets a grappling hook,

Mikey gets the golden handbrake for making those tight turns,

Donnie gets a Mutagen tracking device built into the spoiler of his buggy which is linked to a alarm on the dash & a wrench for making mobile repairs.

Each Turtle also has their own color coded T-Phone, to stay in touch on the move around the mean streets of New York city.

You will also get x10 black studs for Caltops which the Turtles use to deflate the tyres of pursuing foes. (Not pictured)

When connected the buggy is partially articulated allowing it to smoothly mount small obstacles & pass by unhindered.

For more pictures see the full album at the following link, contains pictures of each Patrol Buggy on their own for higher levels of detail:

If this set were to be produced by the LEGO group, then the Minifigures should have the same heads as in the episode "Panic in the sewer". This would increase the collectability of this set. All four Turtles in one set would be a great seller. I know I would buy it.

Each Patrol Buggy has around 30-40 pieces each approximately, (TBC) So around the 170 piece mark if you count the minifigures & weapons. I as a AFOL would pay between £17-25 for a set such as this.

My son Daniel 4 years old loves his TMNT LEGO Patrol Buggy, as does his 11 year old cousin Stanley, both are massive fans of the show & Lego in general.

Changes to the Model: Larger wheels for the rear axle on all karts, new central linkages had to be made, you get a spare one for the T-Train mode.

The square rev counters have been replaced by round metalic ones.

Casey Jones has been included with a unique look & of course sports weapons.

April has been added with her Iron Fan weapon.

Splinter is also along for the ride with dark red legs from a Foot Soldier.

This set would be great with all the Turtles & Casey Jones, 5 minifigures would make it well worth £25-£35 in my humble opinion.

At £35 the set would also have to include a bad guy to do battle against. I think that as we already have a Dog Pound mini-figure, the natural choice of enemy would be The Rat King possibly with a giant rat to ride & smaller rats to do his evil bidding.

This set would complement the existing TMNT sets from the LEGO group.

Thanks for taking the time to look at my cuusoo project & thank you for the support & comments, they are greatly appreciated.

Remember many more pictures can be seen at the following link: 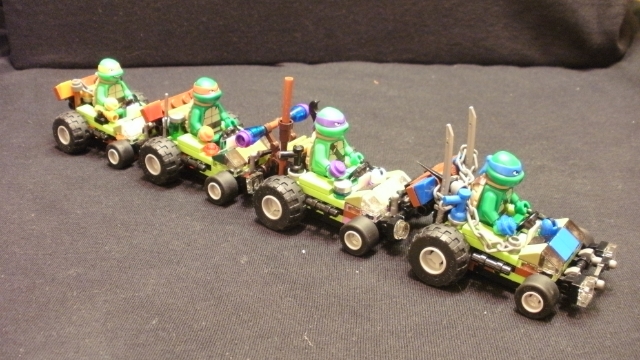 T-Train formation, this configuration allows the Turtle to slip through small gaps without losing speed. The formation is highly articulated allowing it to pass bumps & lumps without any problems. 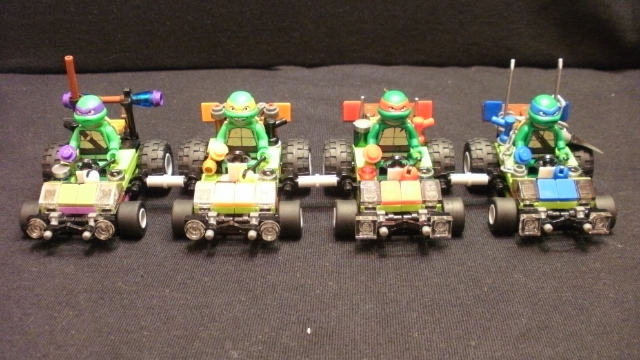 This is the Road-Block formation, this configuration is used to prevent the Turtles enemies from escaping around the flanks. This formation is also highly articulated, imagine the Turtles riding along inside a large sewer pipe, this configuration allow the Patrol buggy to hug the floor & sides of the sewer pipe. With enough speed they coould possible loop upside down inside the tunnel. 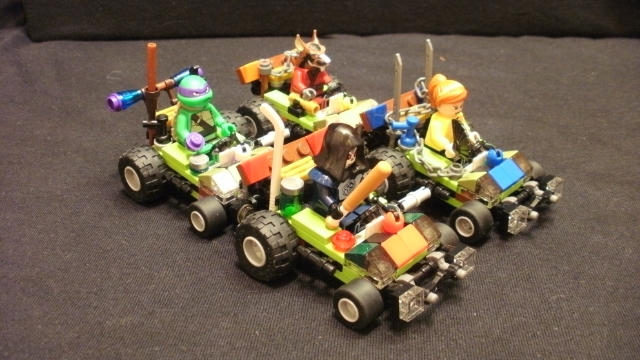 During the TMNT Episode "Of Rats & Men" We can see that allies of the Turtles will also use the Patrol-Buggy in times of great need against the giant evil rats of the Rat King. Using the Patrol-Buggy to back up Leo in the Shellraiser. 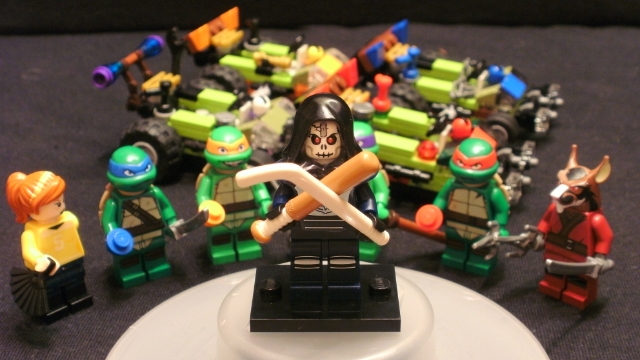 As requested. Introducing Casey Jones, in "Of Rats & Men" Casey Jones is following behind the Patrol-Buggy on his push bike, while Mikey is being pulled along on his skate board wearing a block of cheese on his head, attracts the Rat Kings giant rats. This time we let Casey ride shotgun. ;)

Casey is mainly the body & legs of the series 4 Ice hockey player, with a Ninjago skeleton skull for a hockey mask & a black hoodie. The hockey stick is from the ice hockey player, to finish him off we gave him the Baseball bat from series 3 Baseball player. I will get him a bike if I can & recreate this scene from "Of Rats & Men". Casey should also come with ice & roller skates.

April is also present with her black tessen "Japanese Iron War Fan" used by Kunoichi (Female Ninjas) of course April is being trained by Master Splinter who is also out fighting in "Of Rats & Men" Splinter is using a Foot soldiers red legs so he can sit in the Patrol-Buggy.

The story of the TMNT Patrol Buggy:

Panic in the Sewers

"Leonardo uses his free time to watch Space Heroes, Raphael tends to the needs of Spike, whilst Michelangelo declares a prank war and immediately hits Raphael squarely in the forehead with a water balloon, which angers him alot and he then starts throwing a multitude of objects at his younger brother in response. Donatello, meanwhile, is constructing a brand new invention; an all-terrain Patrol Buggy with four detachable sidecars. Michelangelo then hits him with a water balloon, and while Donatello chases after him, he announces that Leonardo will be his very next target.

Later, Dogpound leaves the foot hq with his small team, he manages to hear April and Leo talking on their phones. He catches April, instantaneously gags her, and tosses her in the van - and the Turtles are unable to come to her rescue quite in time. Leo begins to panic, but Raph snaps him out of it by reluctantly quoting a line from Space Heroes. The Turtles then chase after Dogpound's van in Donnie's incomplete yet relatively operational Patrol Buggy. Dogpound and his team then pursue a tanker truck on Houston Street. They easily catch up to it and Dogpound successfully tyrannizes the driver into leaving....Just as he's about to order one of the foot ninjas to call Shredder, the Turtles appear in the buggy and Dogpound is greatly suprised to see them there. A big chase ensues, during which Donnie reads the name of the chemical on the back of the truck and appears to have figured out The Shredder's plan. The tanker is full of chlorosulfonic acid, which reacts violently with water. If it gets poured into the sewers, it will incinerate their lair within seconds, including Splinter.

Soon, both the tanker truck and the van with April inside split up in completely different directions. So, the Turtles detach the buggy's sidecars in order to follow both vehicles at once. Leo and Mikey follow Dogpound, while Donnie and Raph go to save April. Leo and Mikey try to stop the tanker by using grappling hooks installed in the vehicle to latch onto it, but they easily break. Meanwhile, Raph and Donnie stop the van by throwing a ninja-smoke bomb into it through the open window, blinding the driver, Fong, and then popping all of the tires with numerous Makibishi spikes. Some Foot Ninjas quickly emerge from the back of the van, but Raph and Donnie easily defeat them; April then finishes off Fong by slamming the van's door into the thug's face, knocking him out cold....

Mikey and Leo finally catch up to the tanker truck, and they then take on Dogpound, but they are unable to defeat him and he proves to be their better yet again. They smoke bomb away, and then see one of the Foot Ninjas both take and put a hose into the sewers. Leo quickly orders Mikey to try and stop him, which he does, while Leo attempts to provide a distraction for Dogpound, which unfortunately results in Leo being grabbed and one of his Katana blades puncturing the tanker. However, Leo quickly remembers what Donnie said about the chemical and tells Mikey to throw the water balloon that he was going to hit Leo with. Mikey cooperates and throws the balloon right at the leaking tank, causing the entire truck to explode. Leo is about to congratulate Mikey when the latter throws another water balloon in his face, much to Leo's surprise"

"Down in the sewers, the Turtles, Splinter, Casey, and April are all watching a current news report about the rodents - the humongous rodents - that are invading the city again, one by one, and the total chaos that is resulting. Despite Splinter's explicit warnings, they decide that they must go up to the surface and at least try to lead some of the rats away, so three of the Turtles and April quickly head up there in the Patrol Buggy, with Mikey wearing a large piece of cheese tied to his head....

This plan actually works for the most part - and tons of rats soon begin following them. Leo then arrives there in the Shellraiser, but a couple rats manage to jump onto it and end up quickly toppling it over. Meanwhile, Casey is riding on his own bicycle behind all of them and begins fending off the rats with some marbles (that can easily be sprayed from the back of the bike and cause the rats to slip on the street) and some tailor-made flamethrowers...However, one manages to catch Casey off-guard from the front and knocks him off of his bike, before snatching him up in it's jaws and bringing him down into the sewers, much to April's grief...Elsewhere, the Rat King then climbs atop one of the huge, copious rats and then commands all of them to retreat back to the hideout"