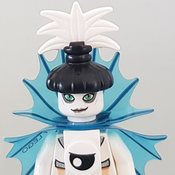 Playing with The EYEcatcher is playing with two buildings in one. Each building with his own appearance and function. Good against evil / Papilla* against EYEwoman.

Be aware of EYEwoman who transforms the minifigures till a group of subjects, which she can control because of the EYEdisk on their heads.

First EYEwoman searches for the minifigures by standing on her vehicle with the pink search cam on the front. When she captures the minifigures, they are locked up in the EYEcocon. Then she changes the console to the throne position and transports the minifigs to The EYEcatcher. Behind her vehicle is the EYEcocon. Very easily it can be attached and detached from the vehicle by putting down or lift the hook. You use the EYEcocon by putting three element together. The roof part you lift downwards for stability. The both glass doors you open by the handles on the side. From here the minifigure walks towards the transformation room.

To undo the transformation, Papilla has to shoot with the canon on the white square on the foot of the EYEsat. The RC-canon is stored in the white building and can be used by pulling the RC-canon out of his box. Prepare the installation by doing the necessary steps and go for the decisive shot. When the EYEsat is hit, the RC-canon picks it up and brings it back to base. The supercomputer Papilla uses, can control the RC-canon and the arm.

On top of the building Papilla uses the arm to catch the transformed minifigures and put them, via the hole in the roof, in his box. The arm can also be placed on a set of wheels which are stored under the building in a drawer. In the drawer you also find the EYEdisks and the EYEspinner.

Bringing the transformed minifigures in safety and conquered the EYEsat; Papilla helps the minifigures bringing back to themselves. By putting them on the backside of the EYEsat you start this process . Put the EYEsat on the rotating device, the EYEspinner, which is held by your own finger. Then spin it with the disk around to undo the transformation.

An eye for an eye, finally EYEwoman will be kept hostage in her own prison cell.

What did you eat for breakfast?

This question came from my wife when I told her the story, hahaha. The inspiration and motivation for The EYEcatcher came from a number of things. It started when I saw Lego Masters on the Dutch television, the episode where the participants had to build their all-time apartment. This was the moment I took my Lego from the attic. In first I wanted to build an apartment myself, finding interesting Lego bricks inspired me to go another direction. The final moment for this story was when I clicked an eye on a disk and put it on a minifigures head, then inspiration came more and more.

When I finished the first concept, new ideas and colouring came up and became the model what it is now. The model has contradictions and at the same time it forms a unity. Black / white, blue / pink, red / green. I built it brick by brick, ordering new stones and continuing building. It was a process of trial and error and a lot of patience. But my enthusiasm kept growing for my first Lego Idea project, also feeded by my 5 year old son who was very excited when he saw it coming all to life.

In my eye there are three reasons why The EYEcatcher is a fantastic Lego set. The first reason is the new and unique storyline. Second is de cooperation between the two buildings, each unique of themselves and closed the two buildings form a unit. And last, all parts are movable/playable and can be used in different functions.

I had a lot of fun building it. What do you think of The EYEcatcher? If you like the idea, please give your support and help it make the eye catcher in many homes. Thank you, regards Erwin