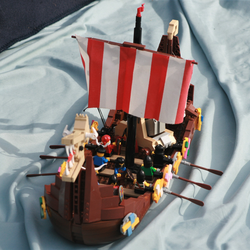 The Martin is a merchant spacecraft which boasts a fair amount of storage. It seats five minifigures within the Forward Command Module, which can be disconnected from the Cargo Bay in the event of an emergency. This section has its own auxiliary engines for such an event.

Power comes from two turbine-driven ion-core engines, which are placed on either side of the Cargo Bay. Vents are visible above the engines to remove excess heat.

The Martin features a quad laser cannon which can pivot 360 degrees on a rotating call and move vertically. For extra protection, it also features two hidden guns which fold into the cargo hold ceiling. This armament is positioned in the rear for defence from marauding space pirates, rather than forwards for attack.

The captain of this ship sits within a bulbous glass cockpit which provides excellent visibility for flight. Thank you for viewing! Please support!