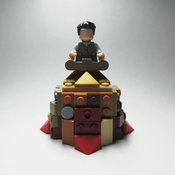 By The_Meditation_Stone
23 comments
The building
The building itself consists of two parts: the candy store, and the flat above it; and the house on the left. The flat above the candy store has all the necessary stuff a house should have like a kitchen, a bathroom, a table, and a bedroom. The house on the left is divided into three parts (without including the roof): the first floor is a living room, and has a small storage room at the back; the second floor has a kitchen, and the child's room; and the third floor has the room of the parents.
Minifigures, furniture & details
Although I don't usually spend time designing minifigures, in this MOC I took an extra week to design some nice minifigures for the set. There are in total eleven minifigures:
• Five children: one girl and four boys.
• Six adults: two mothers, two fathers, and two grandparents.
Another thing I don't usually spend time designing is the furniture. It is my first modular MOC, and it was really a challenge to design all the furniture for each room in the set, as I'm very perfectionist, and I wanted to give the street the most realistic appearance I could.
As I've said, I'm very perfectionist, and that means I pay attention to small details that could improve my MOC's, and I apply them (if I can) to the set. For example, I wanted to use a sausage in a creative way, and I used it in a lamp, I wanted to make a cash register, and I built it with an original lego printed piece, or I placed a 1x1 round piece that glows in the dark as it was a moon in the child's room.
Great set
I really believe that this would be a great set, as it is a great display model, and would seem as a great modular in every collection. The building experience is amazing, despite its amount of pieces, it's not a repetitive build, as it uses a lot of technics, especially SNOT.
DON'T FORGET TO SUPPORT!!