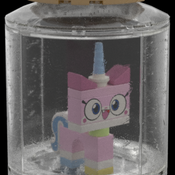 The Avatar: The Last Airbender - Bending Battle Playset is my attempt to pay tribute to and capture a slice of this incredible and influential show in LEGO form. Please note that many of the prints in this set would not be final, certain elements, such as Zuko's scar, Aang's forehead tattoo and Katara's hair loops that would be printed on the faces were not available to me. I wanted to put a bunch of fun play features into this build as well as many of the show's most iconic and beloved characters.

Minifigures
This set would include seven minifigures from the main cast, Aang, Katara; whose face would be double printed with a serious expression and a kind smile, Sokka; whose face would be printed with both a goofy grin and his face paint from episode 2, Toph, Suki, Zuko; who would have an extra hair piece that more closely resembles his look in season three, and finally, Iroh. The set features lots of fun accessories for the minifigures, such as Aang's staff, Katara's pouch of water, Sokka's boomerang, Suki's fans, Zuko's swords, and Iroh's tea set, as well as the white lotus pai sho piece.
The beautiful look of the show is one of its strongest aspects, and I tried to mimic this with a bright and accurate color scheme, as well as varied and expressive minifigures.
Play features
Perhaps my favorite part of designing this set was working in all of the fun play features, the small rock assembly features a way to launch Aang's glider, as well as a holder for Zuko's swords, but the real star of this set's play features, is the simulated bending.
One play feature has been included for each of the show's four main elements. For air, Aang's air scooter rises and falls on a cam when a small gray lever is turned. For earth, a large boulder can be launched from the cliff wall when an action panel on the back of the set is pressed. For water, the entire waterfall can be swung back, sending several orbs rolling down a ramp, as if Katara or Aang are drawing up water from the waterfall. Finally, for fire, aside from two powerblast pieces, there is a catapult near the top of the build that can launch fire pieces.
Appa
Team Avatar would never be complete without their beloved fluffy flying bison Appa, who is a major part of this set. Appa has articulated legs, as well as articulation in his neck, mouth  and tail, giving him the flexibility to adopt. lots of expressive and adorable poses. There is space for several minifigures to ride on his back as he flies off to the next adventure!
Expanded Play
Those who buy this set are not just able to recreate scenes from the television show, but also create their own stories within the setting. I wanted to include a play feature from all four elements so that no one had their favorite element left out, and those who buy this set can use it in tandem with minifigures from their own collection, making new benders with fun and exciting stories!
I am unsure of the current licencing situation surrounding ATLA and LEGO, but as interest around the property is seeing a great resurgence, it is my hope that LEGO will give sets of this licence another chance at success.
Piece count ~ Approx 720