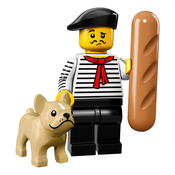 I am a fan of the Supercell 'Clash Royale' video game.
It includes a large series of buidings as towers and huts that can be used as nice models for the creation of new Lego sets.

This is the second set I created.
It is the inferno tower. It can send a terrible laser beam from its lens and burns all around.

I wanted to make it playable respecting the scale of the other 'Clash Royale' projects I created :
The gobelins minifigures included in my first project (the 'gobelin hut') can be used to play with it.
Then, let's be ready to prepare a delicious BBQ !

I analyzed many 'Clash Royale' original pictures of the inferno tower trying to include the distinctive signs of this building in my project :

Improvments that I'm thinking about : including a lighting brick so that the lens can bright in the dark.

I really hope that people who enjoys that video game will be happy to discover (and play with) my building... and with the new ones I'm preparing.