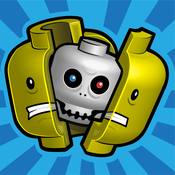 HALF RINK PRACTICE: The Tigers have a practice. A Goalie and 2 players make up the team on this half-rink.

Pass and Shoot, set up the Goalie and try to beat him from the point. Holding the minifig allows you to manipulate and shoot the puck with it's held stick. This works very well actually, I should make a short video demonstration eventually.

Buy 2 sets and make a full rink and have a real game!

Players take turns shooting the puck from where it lies, based on whose player is closest to the Puck.

When the puck stops the team with the closest player to the puck, moves that player to the location of the puck. You can only move one player at a time. The player can pass to an open player for a better angle or attempt to shoot on the Net.

After every second turn, each team takes, the Goalie is allowed to be re-positioned. Careful how far from the net you let your Goalie go!