Dilbert Lego: The Revenge of Dogbert 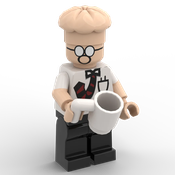 Dilbert, a comic that has caused readers to break down laughing since 1989, now has its first Lego appearance! The set includes an iconic brick-built Dilbert logo/title, three cubicles, the Pointy-Haired Boss' office, the Conference Room, the Presentation Room, and the Illegal Weapons/Experiments Testing Room.
The set includes 10 different minifigures as well as 2 brick-built figures. The characters included are: Dilbert, Wally, Alice, Ted, Pointy-Haired Boss, CEO, Meeting Moth, Phil the Prince of Insufficient Light, Asok, Elbonian, Dogbert, and Catbert. The set also includes 2 speech bubbles, a Cloud of Doom, several coffee cups, and money.
The cubicles are each designed to fit a certain main character. Dilbert's cubicle includes the Cloud of Doom and visiting Catbert. Wally's cubicle includes a giant stack of papers. Alice's cubicle includes a hole in the cubicle wall due to Alice's Fist of Death, a lethal weapon used commonly in the comics. The Alice character also has one sleeve rolled up to continue this reference. The conference room includes the annoying Meeting Moth, and a deal between the Elbonian and the CEO. The Pointy-Haired Boss' office includes Ted acting as a table, Dogbert acting as a consultant using mythology and star patterns to make decisions, a stack of papers to give to unsuspecting engineers, and the Pointy-Haired Boss himself. The Presentation room has Asok giving a presentation to an empty room (hmm..) and a computer for his slides. The Illegal Weapons/Experiments Testing Room includes Phil the Prince of Insufficient Light with his iconic giant spoon, waiting to throw Dilbert in Heck.
I hope you enjoy this hilarious comic as much as I do, as well as my build and ideas.
Every update for this project acts as a promotion in the office. 10k supporters would be the much-desired promotion to CEO! Stay tuned for every update, as each one has funny references and maybe even your ideas in the comments! I am open to suggestions, and I will try to look at every comment!