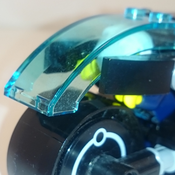 A movie came out in 1982 by the name of Tron.  To refresh from those that haven't seen it, an arcade owner gets zapped into a computer universe.  The best scene in the movie is the Light Cycle Battle.  I loved this movie when I was yonger and have always wanted a LEGO set based upon it.  My design is a recreation of the Light Cycles.

When I started this project my goals were twofold.  I wanted to make a Lightcycle from the Classic 1982 Tron Movie that was to scale of a LEGO minifigure that would both fit the minifigure inside and have rotating wheels.  It took my quite a lot of building and rebuilding as well as finding the right peices until I came up with My Tron Light Cycle design.  Now you can't just have one light cycle, where would the fun be in that.  So the idea is to have either 4 or 6 bikes in one set.   Yellow, Blue, Orange, and Red for the 4.  But all six colors of Black, White, Blue, Red, Yellow, and Orange.  This way you can have multiple colors from the movie and recreate the game with your friends.

I know that Black and White weren't in the original 1982 movie, but in Tron Legacy they did have a white one that Flynn rode and it was based off the original design.  That is why I decided to include it in this project.  Go big or go home really.

Now,  I'm not great at custominzing minifigures, so I did the best I could with the Ultra Agents Figure and helm.  I figured you would need at least two characters, Flynn and Tron,  but I'd like to have them and at least one of the red guys for the bikes.

Since finishing my design, I have set out to make all the color cycles that I can. And I have an army of these Cycles in my living room in all the different colors.  I don't expect them to make it, but it is fun to create.