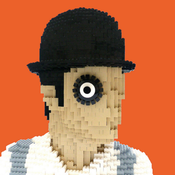 Q * bert is a Gottlieb arcade game from 1982, created by Warren Davis. The protagonist of the game is Q * bert, one of the icons of the Golden Age of arcade games and one of the most bizarre: it is in fact an orange fur ball with two eyes, two feet and a prominent tubular nose, also known for the strange verse and the comic "@! #? @!" that it emits to every life lost.

Game mode
The Q * bert playing field is an isometric projection of a pyramidal structure of cubes with three-colored faces. The purpose is to jump from one cube to another to make each face a specific color (for example, from blue to yellow). In the first levels, this is as simple as jumping on the face, but as the difficulty progresses the task becomes more complicated: you have to jump on the cube twice, or by jumping on a recolored cube the color returns to the wrong one, and so on. If you jump into the void on the sides of the pyramid, Q * bert precipitates and you lose a life.

To make the task more difficult, there is an assortment of strange enemies that threaten or hinder Q * bert's moves. The Coily snake appears at the top of the screen inside a purple ball, which bounces down. When it reaches the lowest row of cubes, the snake jumps out and begins to chase the protagonist by jumping from cube to cube. Furthermore, red balls appear that fall on the pyramid, which, if they meet Q * bert during the descent, make them lose a life. Other threats come from Ugg and Wrongway, two purple gremlins that bounce along the sides of the cubes. On top of that, Q has to deal with Slick and Sam, two green pineapple-like beings who return the cubes to their original color as they pass.

In addition to some strategic leaps, the only means that allow Q * bert to defend itself are the rotating disks on the sides of the pyramid and the green balls that bounce off the squares. The discs provide a quick escape, bringing Q back to the top of the pyramid while Coily dies in an attempt to chase him. The green balls freeze time, giving Q * bert the chance to run freely around the pyramid for a few seconds.

The levels of the original game are 9, each consisting of 4 rounds: the ninth is repeated ad infinitum.

I hope you enjoy and support my project.