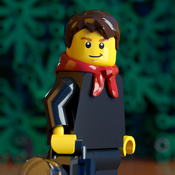 By Brickester
344 comments
Welcome to Studbrick Park, home of Old Bricks United Football Club and also known as ‘The Home of Football’.

This project focuses on the whole experience of a football club, from the actual football pitch to the changing rooms, the ticket office, the shop, the queues for stadium access and the stand. There is also a soda stand and a statue of a legendary player: Bobby Squarefoot.
The stand and its back façade are inspired by many English football stadiums built in the first decades of the 20th century, such as Villa Park in Birmingham or Craven Cottage in London. This style of construction has also been used to build many of the classic stadiums found around the world.
The club names, logos and shirt designs are fictional.
DETACHABLE BUILD

Under the stand there are 5 rooms that you can detach from the main building to play inside:
- The Main Entrance, through which you can access all the club facilities (changing rooms, shop, ticket office and pitch)
- The Shop, where you can find exclusive club products such as official shirts, mugs, badges and many accessories with the club logo printed on them.
- The Ticket Office, with desk and safe.
- The changing rooms, with their lockers and their pitch boards, which the coaches use to explain game tactics to the teams.
MINIFIGURES
There are a total of 19 suggested minifigures. (Many of them could be optional)
- Mr. President
- Home Team Coach
- Away Team Coach
- 5x Home Team Players
- Home Team Goalkeeper
- 5x Away Team Players
- Away Team Goalkeeper
- Referee
- Club Staff Male
- Club Staff Female
- ‘StudSoda’ stand assistant
Plus the grey statue minifigure.
MODEL DATA
Aprox. 2450 pieces.
Size: 64 x 16 studs size for the stand, 64 x 48 studs for the pitch.
Stand capacity: 80 minifigures.
Minifigures: 19
STABILITY TEST

The stand cover was designed fulfilling the stability tests to ensure it does not collapse.
EASY TO STORE
The lighting towers and the pitch are removable, so it’s easy to lift up the stand and store it on a shelf or put it inside a box.
MODULAR STAND DESIGN

It will be possible to attach together 2 stands with 2 copies of The Football Club with their connectivity parts. And with the alternative build (with the same pieces) you can make a narrower stand which fits in the back end of the pitch.
With 4 copies of TFC you can ‘close’ the full stadium.
MULTIPURPOSE STAND

The stand could be used to celebrate many different events, such as music festivals, parades, opening celebrations and other sports events.
Thank you in advance for your support!