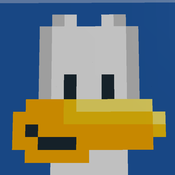 By PenguinCraft
6 comments
Club Penguin was founded in 2005 by 3 fathers wanting to make a safe online world for their kids to play in. In 2007, this global phenomenon was bought by Disney for millions of dollars. Ever since, Club Penguin has grown, and grown, and grown. Disney have really helped Club Penguin expand. Minecraft is about placing blocks to build anything you can imagine in the virtual world. As a fan of both MMOs, I am proud to introduce the Club Penguin Minecraft Takeover! This set is a custom penguin mob based on the Minecraft skin in my profile picture. Special thanks to WipeoutZone for this amazing rendering.

P.S. Keep Calm and Waddle On!