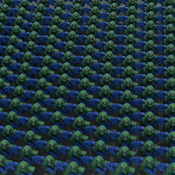 By Kmkinglai
31 comments
SLAM DUNK is a Japanese comic and anime from 1990 to 1996. It is about the story of a basketball team from Shōhoku High School in the Shōnan area of Japan.
At the beginning of the story, it talked about how they formed their first team with 5 weird but talented players joining the team one by one, and then the way to win the champion with their province, and also the way to fight to the final match within their country. A shock ending of the series is one reason it impressed the fan so much too.
By December 2022, SLAM DUNK launches its new movie titled “The First Slam Dunk” in Japan after 26 years since their final comics chapter in 1996. I was so surprised and excited as a fan and therefore made this MOC with the five key players of the Shōhoku
basketball team with reference from the poster of the movie. I built the features of each of them, as well as their sneakers.
If you a big fan of this series, you must know these guys very well too. Hope you like it!!!