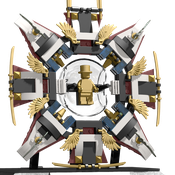 This submission is based off the Wraith-Wing design that was conceptualized from the SR-71 Blackbird’s Delta-Wing. I love the look of the plane and wanted to try and design it into what a spaceship might look like. I have used this wing and ship design in a previous build but with a different purpose.

Taking constructive criticism and suggestions I incorporated more playable features in this ships design. Growing up in the 80's and 90's the space series of LEGO sets were my first loves. Bring Space Back!
Having built the ship in LDD then piecing the bricks, I have one of these hanging on my wall. At times I just stare at it but then have to take it down just to get a closer look. Art like but build to be held, what better excuse than for LEGO.

The design has a 360-degree laser turret on the rear of the ship along with a cargo hold capable of holding two holding cells and guards for any unruly space dwellers. Along the main haul you will find a trio of support ships attached using magnetic mounts. At the front a functional cabin canopy to allow easy access to the pilot seat.

The ship has a flat lower haul allowing it to sit with the mounting base, but for the base I wanted to pay homage to the past LEGO Space Police series. One the base there is one Red, two Green, and three Blue panels referencing the translucent color of that series. There are text tiles that spell out SPACE. I’m sure Benny is around somewhere.