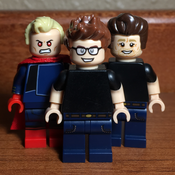 By Stuntman Brick
18 comments
Let's be honest...as soon as you read the title of this post, the theme song entered your brain. That beautiful piece, that wonderfully nostalgic score by John Williams, nominated for two Academy Awards. We all love Home Alone. It's one of those films that will just never go away. It's sweet, it's funny, it's playful, it's perfect. So why not have a set based around the primary location from the film, the McCallister house?
This rendition of the McCallister house, home to Kevin and many a McCallister, portrays the house during the climax of the film, during the attempted burglary by the Wet Bandits, Harry and Marv. Within the house lies a pile of broken Christmas ornaments, a floor full of Micro Machines, a blowtorch strung up next to the kitchen door, and a barrage of swinging paint cans, all armed by Kevin to fight off the intruders! Minifigures included with the set would be four of the main characters: Kevin McCallister, Harry Lime, Marv Merchants, and Old Man Marley. The rooms in the house include the kitchen, the foyer, the TV room, Buzz's bedroom, the parents' bedroom, and the attic. The roof and second floor are removable for maximum playability and exploration. The complete build, much like the Ghostbusters Firehouse from 2016, captures the iconic and aesthetically-pleasing exterior, but also includes a fully-functioning and detailed interior.
I starting building this set a year or two ago, just focusing on the facade and part of the interior, just attempting to capture the iconic look of the exterior of the house, as well as the main staircase. Recently, I decided to expand the set and build the two wings of the house, to include other crucial sections, including the bedrooms, kitchen, attic, and TV room for a full, playable rendition of the house we all know so well. I have always believed that a set based on the McCallister house would be a popular and welcome inclusion in the world of LEGO. I love this movie, and the best way I can pay tribute to it is through LEGO.
Thank you!