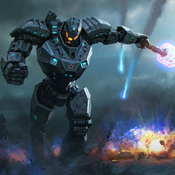 By NK LION
11 comments
The construction is inspired by the 2013 film Pacific Rim directed by Guillermo del Toro. Which is about giant creatures called "Kaiju" that destroy cities, to combat this threat it was decided to create a new giant robot weapon called "Jaegers".
The set is composed of Pcs 673, having the Gipsy Danger Mark 3 Jaeger and the Category 4 Kaiju Otachi, where their match took place in Hong Kong where Gipsy Danger was victorious. The Gipsy Danger figure is poseable on each limb, has the plasma cannon, chain sword, and chest reactor beam as accessories. Also, some small ship constructions that Gipsy Danger used to hit Otachi. The Otachi figure is multi-jointed and the front legs must be removed to attach the wings.