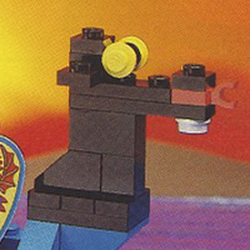 The ultimate clash of robotic dinosaurs, this set combines science fiction and prehistoric action! The evil Red faction assaults the good Blue base. Each side has a large ground Robodino, a robotic Pterodactyl, and a small ground robot. The Reds ride into battle with a T-rex, a Pterodactyl-Jet, and a Raptor. The Blues defend their base against them with a Triceratops-Tank, a Pterodactyl-Jet, and a robot monkey (the first ever in Lego history, as far as I know).

The T-rex is armed with a long-range gun and a short range gun on either side of it, as well as a laser emitter in its mouth. Its rider sits on a hinged seat on its back, and is equipped with a large gun and a visored helmet. The T-rex itself is made of Lego Dinosaur parts with the T-rex upper jaw from Lego Adventures.

The Triceratops-Tank is armed with a massive laser cannon and a smaller cannon on either side, as well as a couple small laser guns on its forehead. Its rider sits on its back, with a roof tile piece on either side of him to form a square for him to sit in, and is equipped with a blaster and a visor-less helmet. The Triceratops-Tank itself is made of Lego Dinosaur parts.

Each Pterodactyl-Jet is armed with a laser turret on its stomach (which turns 360º) and two flick-fire missiles on its back. Note that the rider of the Blue Pterodactyl-Jet has a large visor like those often seen on astronauts, except his is blue (and also hard to see because of poor rendering in LDD). The Pterodactyls are from Lego Dino, and have flapping wings and opening mouths.

The Blue robot monkey is armed with two pistols, and goes up against a Raptor armed with a two-barreled turret on its back (making them technically equally armed). The monkey and the Raptor are the only unrideable robots in the set.

The Blue Base has a garage beneath it for the Triceratops-Tank, a roofless room for playability, and a latticed tower with a mounted laser gun on top. A ladder (which is hard to see in the images) at the back of the Base allows people to ascend to the room above, which is equipped with computers and a coffee maker. The ladder can also fold up to keep out the Reds.

Please support this one-of-a-kind set and make it an amazing reality!

If you have any questions, feel free to comment!