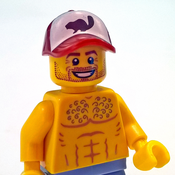 2016 marks the 20th anniversary of the release of their debut single "Wannabe", which hit number one in 37 countries and established them as a global phenomenon. The Spice Girls have sold over 80 million records worldwide, making them the best-selling female group of all time, and one of the best-selling pop groups of all time.

The set would contain all original members of the group:

The minifigures are wearing what we believe to be the Spice Girls most iconic outfits: leopard prints, crop tops, pink babydoll dresses, the union jack, tiny black mini-dress, and carry in their hands microphones for their performances.

The Stage itself is based on one of many that the Spice Girls used over the years, and includes rotating led screens that spell S.P.I.C.E., wind turbines under the stage, sound system speakers and lights, lights and more lights! Bring out all your favourite minifigures to watch the Spice Girls perform all their massive hits; We hear the LEGO Lumberjack is a big fan!

Please share it as much as you can and help make LEGO Spice Girls a reality!.