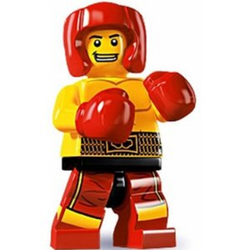 By Martin_LegoSK
16 comments
Hi everyone!
I'm introducing to you, Peter Sagan as a Brickheadz. I suppose you know this person, but for those of you who don't, I'll give you some "basic" information.
Peter Sagan is a Slovak cyclist, 3-times world champion (2015, 2016, 2017). He is also an owner of 7 green jerseys,  winning the points' classification on the Tour de France. He also has victories on the monumental classics: Paris-Roubaix and Tour of Flanders. I could continue in listing many more prestigious achievements...
I've built this LEGO mainly because I'm a really big fan of Peter Sagan and cycling in general.
I believe this "little sculpture" of Peter Sagan would be a great LEGO set because Peter Sagan is one of the best cyclists in its history, and he grabbed the attention of fans all around the world by his originality and successes. Making this LEGO set as an official one would be a great honor for this significant man :)
I believe that every true cycling fan would be happy to own a LEGO Brickheadz of Peter Sagan :)
So don't hesitate to support it :)