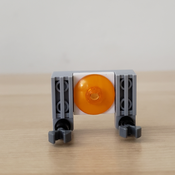 By TentacleEyeMan
8 comments
The Forgotten Cavern,one of the most mysterious areas in Lego city. John C. Davvel, one of the bravest adventurers is exploring The Forgotten Cavern.Let's have a look,shall we? Entrance- It has a neat feature. Turn the knob in the front to unlock the door! This looks like a crooked and old entrance because it was found 800 years ago by explorers! Boulder- Has another feature, Turn the gear to knock the boulder out of it's spot! This cave is forbidden,so it's a trap to keep you out! Leaves- The outside part of the cave. It's the exit of The Forgotten Cavern,so if you want to get out of the cave,that's your ticket. Inside- It's the creepy part of the cave,so you would want to get out of there  quick! It has a skeleton and a glow in the dark spider! That's all about The Forgotten cavern! I hoped you like it!