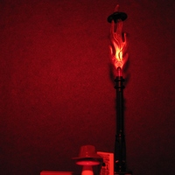 Blizzeta is the boss battle at the end of the Snowpeak Ruins, the fifth dungeon in the video game The Legend of Zelda: Twilight Princess.

In the game, Link goes to the Snowpeak province looking for one of the pieces of the broken Mirror of Twilight. There, he finds a yeti named Yeto, who claims to have found it and takes Link back to the Snowpeak Ruins, where he lives with his wife Yeta. After Link makes his way through the dungeon, helps Yeto make some soup, and finds the key that he needs, Yeta takes him to the room where they keep the Mirror Shard. She is corrupted by the shard, encases herself and the room in ice, then attacks Link.

Included in this project are:

Because the bottoms of the ice elements more or less come to a point, and it would be rather difficult to play with or display large numbers of them balancing on one stud, I have developed two methods to keep the ice pillars upright. The first option is a stand for each pillar, made of one 4x4 round plate connected to a 2x2 round plate with a hole in the middle for the bottom of the pillar to attatch to. The next option is a device to hang the ice pieces from, similar to a mobile or chandelier.

This model currently contains 1505 pieces. It was built in Lego Digital Designer, and rendered using Bluerender.