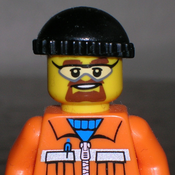 This is Thunderbird 4 from the 1960s TV series "Thunderbirds", made by Gerry Anderson. The underwater rescue vehicle is one of the best known of all the Thunderbirds. It was carried in a belly pod by Thunderbird 2. The series has had more recent air time than many of Gerry Anderson's other programs. There was a feature film is 2004 and another is being made. "Thunderbirds" has been regularly re-run on BBC2 prompting the Tracey Island model to be one of the most sought after Christmas presents in 2000. Ideally the grey propellers at the back should be yellow. The transfers were a bit more opaque than I had expected so I have included an image with them removed.