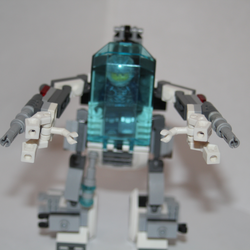 The ALPHA Transforming Car is a project I have been working on trying to make good looking transforming vehicles.

Lego has many sets (many of which I own) that partially transform, I think these are so cool and wanted to see if I could make a fully transforming car/mech.

I made this project because I wanted to make a really cool transforming car. I started by making a special base out of several elements. This base can have attached to it two legs, two arms, a drone (that is used as a spoiler on the back when the transformer is in car mode and as a jet-pack when it is in mech mode) as well as a windshield and front set of tires.

I then created the special legs with wheels that clip together to make the back-wheel assembly and a pair of arms that can fold into the sides.

Finally, I added the windshield and front tire cover/bumper, the drone that serves as a spoiler/jet-pack and the front wheels which fold back to get out of the way of the legs when in mech mode.

I think this would make a great Lego set because it is modular and you could use the base to make other transforming machines, has many cool features including a separating drone and the ability to transform from a car to a mech. Also, many of the other transforming Lego sets have been popular and I think that this one could be popular too.