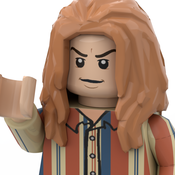 Frasier is a critically-acclaimed American television sitcom created and produced by David Angell, Peter Casey, and David Lee. The series follows radio psychiatrist Frasier Crane, played by Kelsey Grammer, who returns to his hometown of Seattle, Washington, where he reconnects with his family.  Frasier's cultural impact is vast, and its recent "renaissance" through online streaming services has broadened its fan base considerably. Its expansive, cross-generational appeal, together with its unique charm, make Frasier's Condo an excellent candidate for a LEGO set.
Frasier fans will quickly recognize his eclectic, high-end furniture, exotic decorations, and famous, abstract artwork, which I have neatly adapted to LEGO's tone and style. Finally, you can recreate your favourite scenes, or throw elaborate but ill-fated dinner parties for a coterie of endlessly critical guests.
Frasier's Condo features six original minifigures: snooty radio psychiatrist Frasier Crane, his ex-wife, Lilith Sternin, his charming producer, Roz Doyle, his fastidious brother, Niles Crane, their down-to-earth father, Martin Crane, and his eccentric physical therapist, Daphne Moon.
I designed Frasier's Condo intermittently over the course of several months, beginning in April, 2020. My ideas were inspired and informed by many brilliant creators and creations, especially ALegoLass and their interpretation of Frasier's condo. Although my idea is complete, I would like to eventually introduce Martin's dog, Eddie.
Please consider supporting Frasier's Condo. Together, we can bring his home to yours.
I look forward to reading and responding to your thoughts and questions.