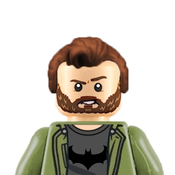 As my second Tron project, I really wanted to do the light runner. It's a really awesome vehicle and has great potential in expanding what could be Tron Lego sets. One of the biggest questions for me was, what would the bad guys be driving? yet another light cycle? no, that would be a bit repetitive. so i thought i'd explore something else in the movie. Those cool parachute glider things! (not to be confused with the light jets) I know it's not exactly the sequence of events from the movie, but i thought it was cool so i ran with it, cause it wouldn't be likely to show up elsewhere in another set so why not.

Anyways, I also decided to go with Flynn and Quorra without helmets to give variety to my tron sets, as well as because they kind of take them off as they drive away. Though they could also be included so yeah.  A future improvement i would like to include would be some sort of firing mechanism for the light runner. Many of the renders I did in gray and white colors because the Black is so hard to see sometimes, I wanted you to be able to see the build and how it's built. The build currently sits at a totally of 268 pieces. Anyways, I hope you all like it and will help me by supporting and spreading this around via social media and whatnot. Thanks for everything!

Also be sure to check out my other projects through the links below!