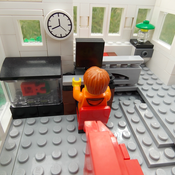 The Vickers Vimy was a British world war I bomber first built in 1919. The plane set many long-distance flight records including the world's first non-stop Atlantic crossing.

My model of it has a few interesting details such as the small generator propellers, the ski on the front, and movable ailerons (I don't have any pictures of them). If this were a set I would give it four-blade propellers which had 1x4's instead of 1x6's. The engines could also have more detail.

The two minifigures should be old fashioned pilots, but I didn't have any.

I also included a picture of the real plane (if it works).

I hope you support it!