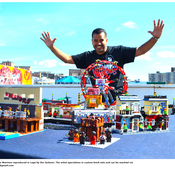 By Diojackson30
33 comments
Martin is an American television sitcom that aired for five seasons on Fox from August 27, 1992, to May 1, 1997. The show starred comedian and namesake Martin Lawrence as the titular character. Lawrence also played several other characters. Martin was one of Fox network's highest-rated shows during the sitcom's run.
Set in Detroit, Michigan, the series stars Martin Lawrence in the role of Martin Payne, a disc jockey with his girlfriend Gina Waters (Tisha Campbell). Martin works for the fictional radio station WZUP.
The main characters are all here in this custom set Martin, Gina, Pam, Cole, Tommy and Sheneneh!
I'm a fan of the Martin series and an avid Lego collector and builder. I was inspired by the recent Lego Ideas sets of Seinfeld and Friends to create this set. The build is centered on Martin's apartment (where most of the filming took place) including Martin's WZUP studio. I believe this set will add diversity to the Lego brand and library. A fun build for all ages and a trip down memory lane to recite all the fun moments of the show during the build.
WAZZUP, WAZZUP, WAZZUP!