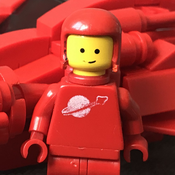 By Captain Pumice
8 comments
And we are back with another small Lego space ship.
This time it's Pink! (ok... pinkish)
My daughter asked me for this color, and to make it small... and to make it for two Space Woman.
Let's admit it, there isn't that much of girlish Lego space sets. Which is unfortunate, because my daughter would love to have a proper size set dedicated for girls.
The moment my daughter laid her eyes on the pink suit, she said it's the friend of the Pink Space Woman (Minifigures series 6) which we had already.
But I got a theory to it.. just hear me out:
In our world Lenny is pink because Lego Movie 2 is based on the relationship between brother and sister. And the fact that sister's Lego universe is strongly connected and influenced by her father and brother Lego universe. So my back story of Lenny is that at some point the white space man Jenny ended up in the sister's world and to make it more girly she simply painted the suit pink.
In my daughter's world Lenny's head was changed with the one of female features and that's sets the story.
The challenge of building small two seatter with the bricks we had, was not a simple one. And we went through couple of designs. Both ends of the ship can open as a hatch. Plus the roof is removable for easy access. We have laser cannon on top and small wings for the atmospheric entries.
This is the 6th model in my Small Spece Ships series. You can check them all at my profile.
Now it's time for my idea and it's going to be Blacktron!