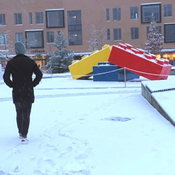 By Tom Gerardin
29 comments
The World Expedition
And here it begins...The World Expedition! The Pharaoh has risen to seek revenge of the one and only Johnny Thunder! Travelling the globe hunting for the most powerful weapon he can find, his search was over after acquired the ancient Cambodian relic,'The Staff of Separation' and is now ready to tear apart anyone in his path of ruling the world!
Our heroes, Johnny Thunder, Dr. Charles Lightning and Miss Gail Storm must reunite to do a little more than find some buried treasure. This time, they have to save the world and stop the Pharaoh's evil plan. But where there are heroes, there are villains. Arch enemies of Johnny and the gang Baron Von Barron and Lord Sam Sinister have gotten word of the Pharaoh's plan and want the Staff of Separation for themselves to tear our heroes apart piece by piece.
The set I've designed has the heroes start off their adventure in the Cambodian jungle hunting for clues on how to destroy the Staff. They find a clue of a crystal that is said to be in the centre of the Staff and if removed, the Staff will be destroyed. So our heroes set off in their jeep which is fully equipped with everything they need to find the pharaoh and save the world. But they have to be fast as Baron and Sam are hot on their tail in their armoured truck ready to take down anything in it's path.
Our heroes had better be ready, the Pharaoh has constructed fortress in the Persian deserts and is full of secrets and traps to stop anyone from trying to get a hold of his Staff of Separation. Johnny and the gang had better tread carefully not to set off any of the Pharaoh's hidden surprises.
So will the Pharaoh succeed with his dastardly plan? Or will Baron and Sam get their hands on the Staff of Separation? Or will the Heroes save the world from being torn apart on this World Expedition? That's for you to decide!
I've put in a lot of effort into designing this set and writing a story to go along with it and I would love it to become a reality, so please do support it. Thank you.