By skywalker89
16 comments
RETURN TO MAGIC. RETURN TO HOPE. RETURN TO NARNIA!
For a long time, and especially since the release of the Chronicles of Narnia film franchise, LEGO fans have been building, creating, and designing Narnia-related sets. And it is no wonder - the series is full of action and adventure, as well as strong male and female characters that children can identify with. Plus, the story affords the LEGO Group the opportunity to invent new parts and bring more rare pieces into more common use. For example, a new piece that might be used is centaur legs. Beavers are animal figures that we have not seen before in LEGO but would be a must for Narnia. Minotaur headpieces could be reused. All in all, Narnia could be a very profitable venture for the LEGO Group.

This, my third Narnia set, is the largest by far. It too is an iconic set for fans of the Narnia series. The 'Dawn Treader' is not the only ship we encounter in the Narnia series, but it is certainly the most widely known and recognized, given that it has an entire book (and now film) named after it. This legendary ship carries King Caspian X, Edmund, Lucy, Eustace, Reepicheep, and the rest of the crew to the end of the world and back again. I took a long time designing and building this ship, trying to get it just right, while staying true to LEGO style, detail, and playability. Take a look!


MAJOR UPDATE!
I recently did a major update to the model, improving a number of aspects, which I will detail below. I hope that these improvements will make what was a decent model better. This model may not yet have arrived at perfection, but I feel that this update has taken a step in the right direction. Comments and critiques on these updates are welcome. 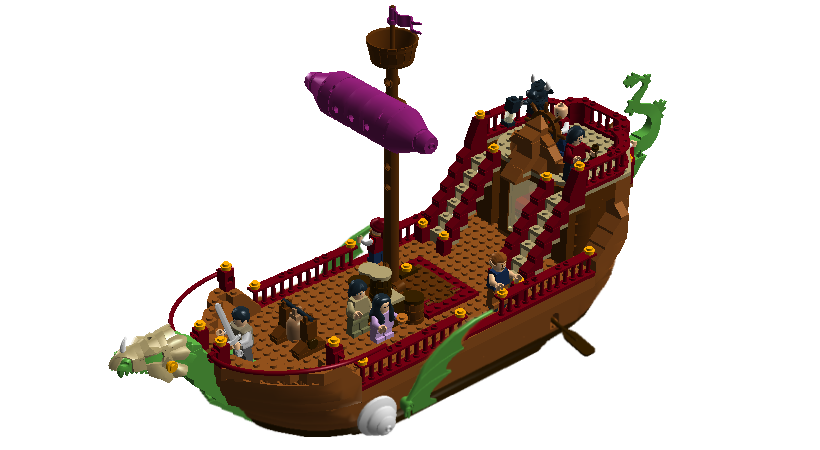 ORIGINAL MODEL
Here is a shot of the original model in its entirety. There were a number of issues of concern that I wanted to address (some raised by my supporters). Here were my major issues with my first design: 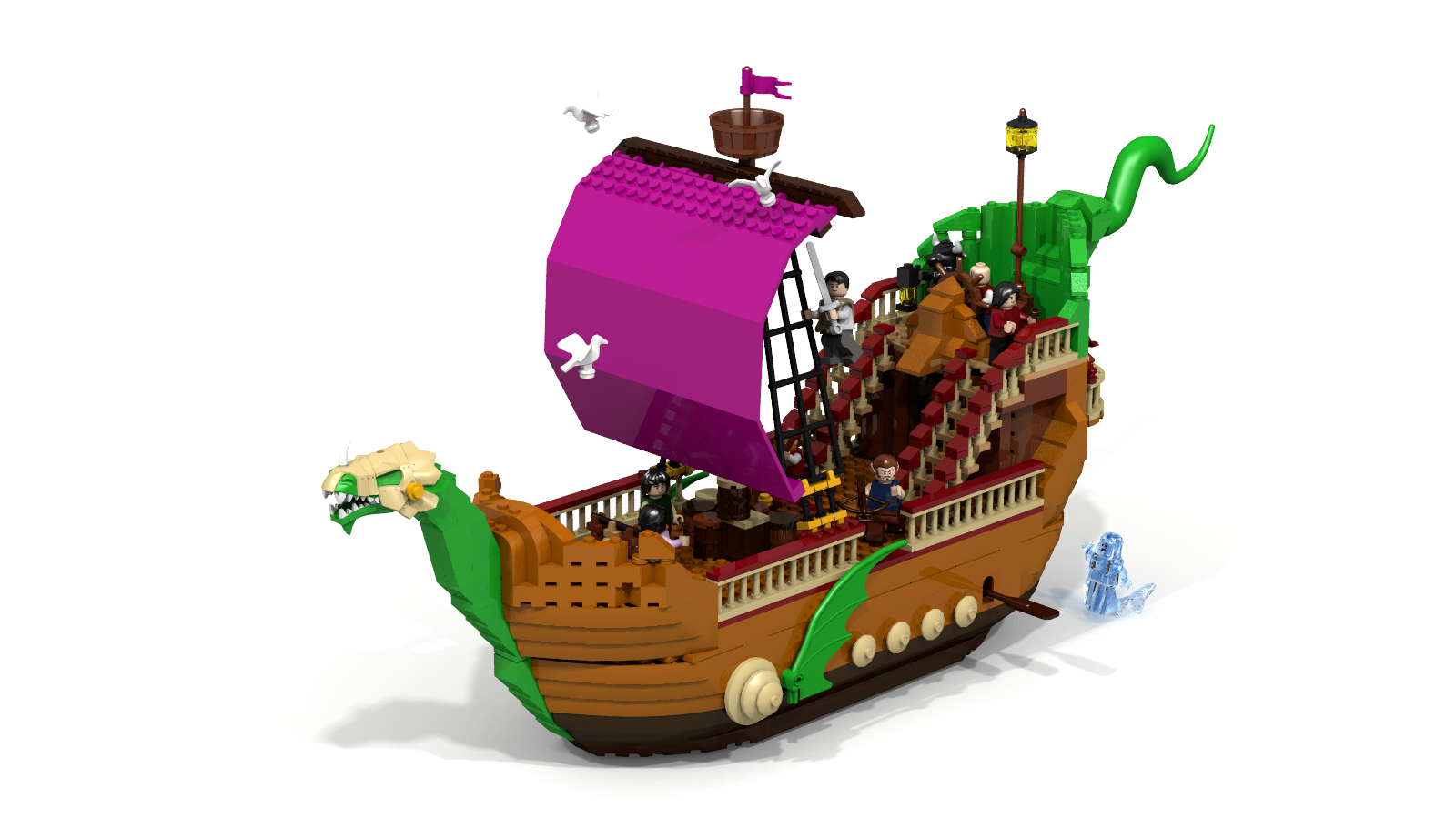 REDESIGNED MODEL
Here is a rendered shot of the new and improved model. In making improvements, I not only looked at the issues I have mentioned above, but I also went back to look at photos from 'The Chronicles of Narnia: The Voyage of the Dawn Treader' movie to create a LEGO version that was more accurate to what was seen in the film. Here are some of the improvements that I made:

UPDATED FEATURES
- Raised the dragon's head at the prow
- Added a jaw to the dragon's head and colored the teeth
- Raised the prow of the ship itself
- Added microfigure statuettes holding the bell to represent the faun statues in the film
- Adjusted the minifigures so that they matched my finalized designs more closely
- Changed the color and design of the railing on the sides of the ship
- Changed the color of the 'swirled' element next to the wings to look more golden
- Added new 'sail' bricks that look more like an actual sail
- Added in seagulls flying about the sail
- Added rigging attached to the mast
- Added 'portholes' along the lower deck of the ship
- Gave the stairway railing a more 'spindley' appearance to match the other rails
- Added the lantern seen at the back of the ship in the film (and book)
- Moved the tail out from in front of Lucy and made it more scaled to the dragon's head
- Gave Lucy a larger, redesigned 'balcony' so that the railing there could match as well
- Put an actual door behind Lucy leading out onto the balcony
- Added a small rudder at the back of the ship
- Added in the water nymph (missing in the original model screenshots)


UPPER DECK
Most of the important elements from the upper deck of the original design are still present and can be spotted here, including the important playability elements listed below:

PLAYABLE ELEMENTS
- Bell engraved with the names of the seven lost lords!
- Barrels and crates of cargo that can be loaded on and off of the ship, or moved about to hide stowaway passengers like Gael!
- Working trapdoor that opens onto a stairway leading to the lower deck!
- Mop and bucket for swabbing the deck!
- Crow's nest to hold crew members looking for land!
- Spinning helm to guide the ship into all sorts of adventures!
- Access to the Captain's Cabin - complete with bed, mirror, chair, and fireplace - lets Caspian, Lucy, and Edmund get away from the hard work of sailing a ship!
- A gaggle of minifigures to help you recreate your favorite scenes! 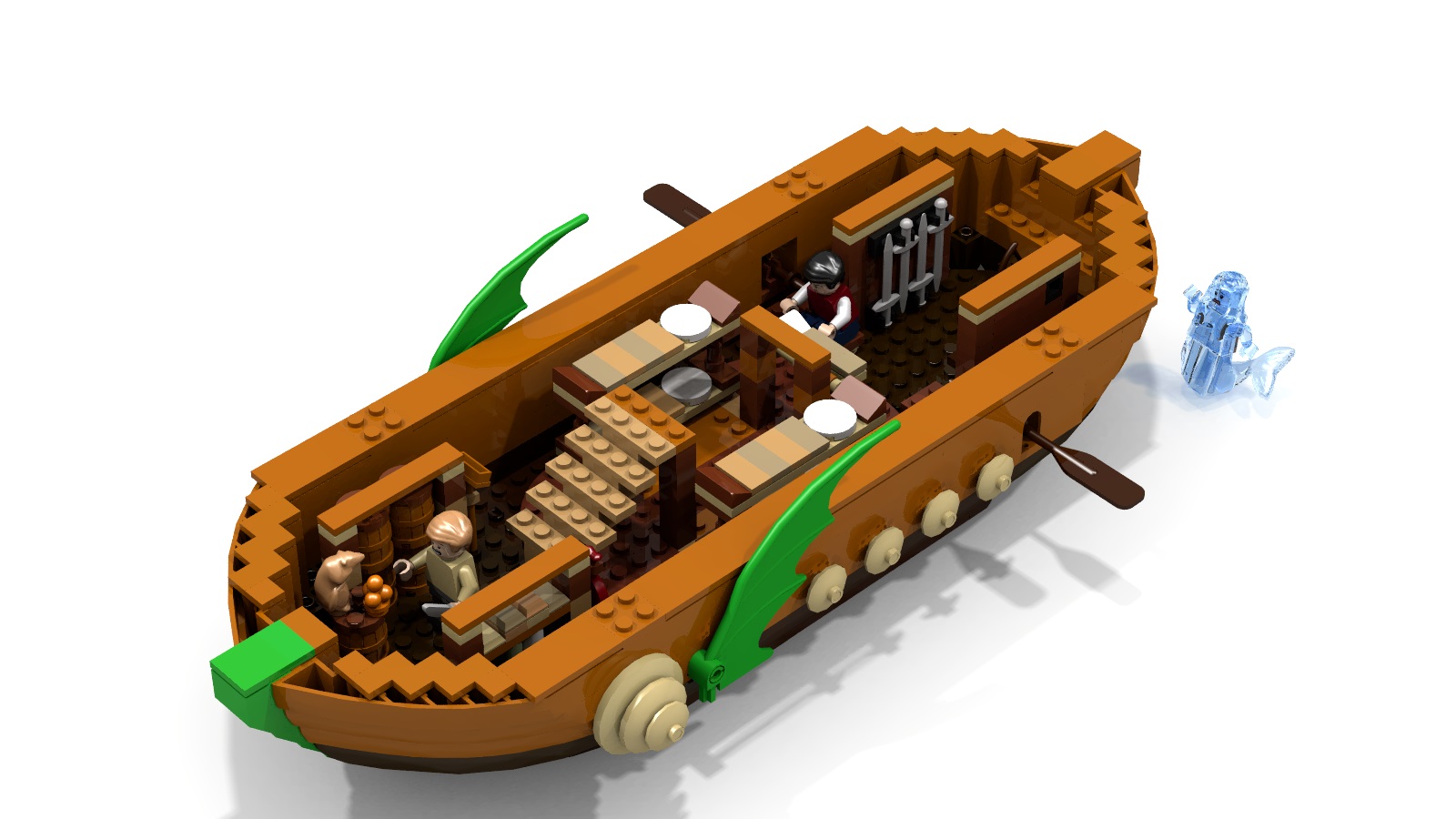 PLAYABLE ELEMENTS
- Upper and lower decks connected by only a few "clickable" bricks to allow for easy removal and extended play on the lower deck of the ship!
- Provisions storage area complete with barrels, bottles, steak and more!
- Barrel of oranges from which Eustace can steal!
- Stairs leading up to the main deck!
- Bunking area can sleep four full-sized minifigures, plus a tiny hammock for Reepicheep!
- Sailors can sit and row for hours on the ship's rowing benches!
- Ship's armory provides its crew with plenty of weapons in case they should encounter any sea serpents, dragons, of unfriendly green mists! 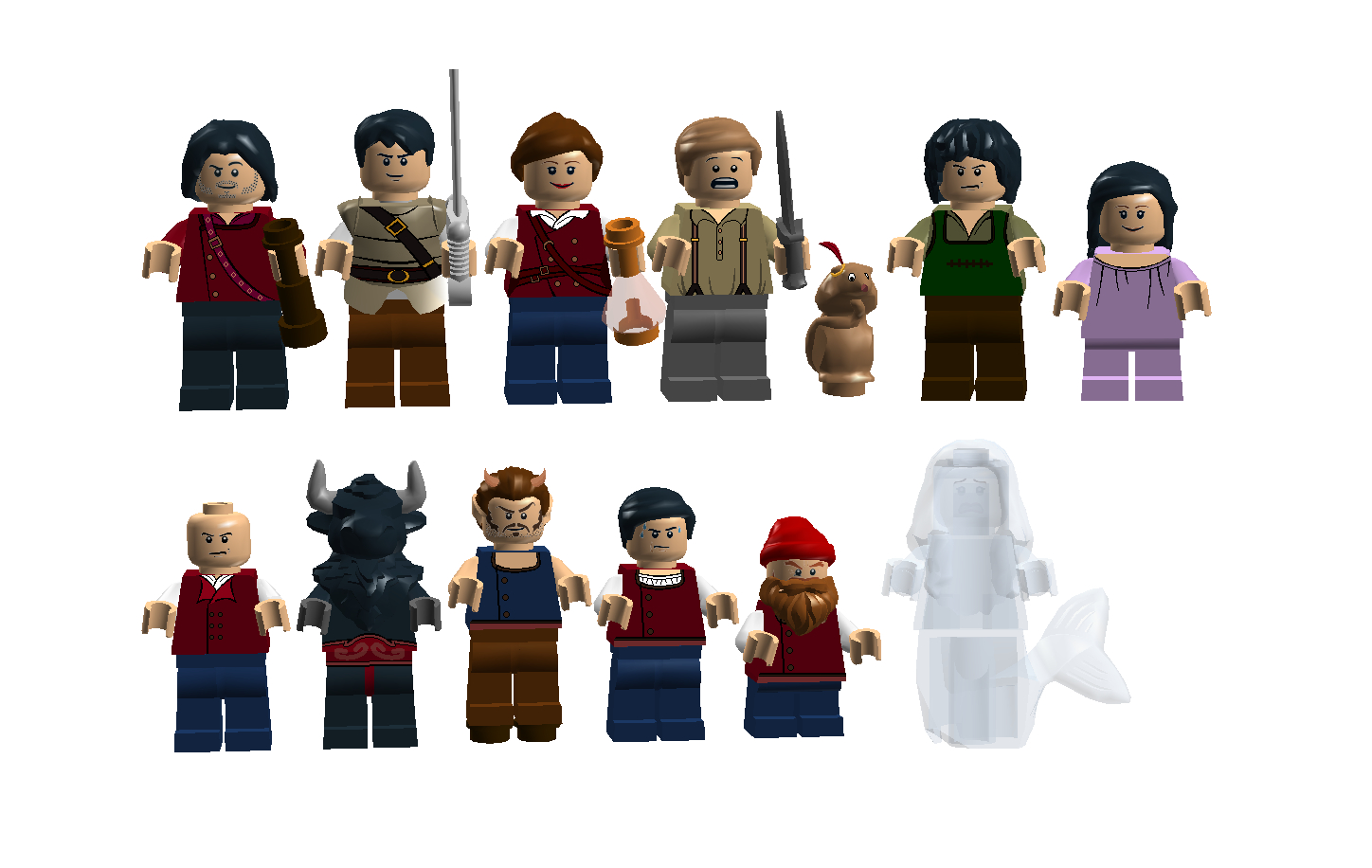 
CALL FOR SUPPORT
I hope that you agree with me about the great potential that Narnia LEGOs may have. Now, more than ever, is a great time to start showing your support. 'The Chronicles of Narnia: The Silver Chair' is now in pre-production. With another upcoming film, Narnia is an even more viable LEGO option! Thank you for your interest, and please consider clicking 'Support'!

If you like this project enough to support it, then please consider what you can do after clicking "Support." Getting publicity beyond the LEGO Cuusoo website is essential for any project that hopes to make it to 10,000 supporters. You can show further support for this project by tweeting, blogging, posting to facebook, posting to tumblr, posting on Pinterest, and many other places as well. For this project in particular, posting to Narnia fansites is also a viable option.


OTHER NARNIA PROJECTS
Continue to check back as I expand my set designs for the Narnia line. I will post links here to new projects as they are approved.

Here are my other current Narnia projects:
Narnia: Through the Wardrobe
Narnia: Cair Paravel Treasure Chamber