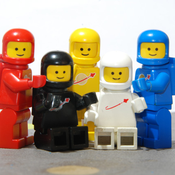 What would be the Asterix stories without the awesome Gaulish druid named.... errrr, well, depending the country, his name is :

So, the Gaul would be completely invaded by Roman legions. Thanks to his Magic Potion, the 38th album will be published next October.

That's why I've worked on this set, which contains the druid AND his cauldron (sorry, no magic potion expected in the set).

The character doesn't have much hairs on his head though the set contains 183 bricks.

As reminder, the previous sets are :

Many thanks for your support.