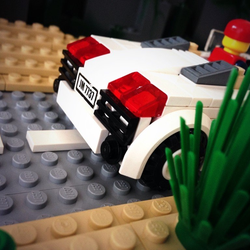 "That's one small step for man, one giant leap for mankind." - Neil Armstrong

45 years ago on July 21 1969, Neil Armstrong became the first to step onto the luna surface. There was also the Buzz Aldrin with Neil Armstrong. It is one of the most important event in the history of humans. Now you can recreate this Apollo 11 - Moon landing event with this set.