Subnautica: Skeleton of the Ancient Leviathan 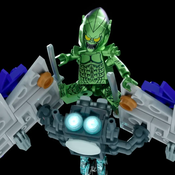 My Project:  Based on the popular underwater survival game SUBNAUTICA, created by Unknown Worlds Entertainment, this is my fourth Subnautica LEGO set that I am proud to present. It is called "Skeleton of the Ancient Leviathan", and it the Bone Fields - a part of the Lost River biome - which houses the fossilized remains of an ancient leviathan.

How I did it:  As with my other sets - "Reaper Leviathan Attack", "Survivors of the Degasi", and "Exploring the Safe Shallows" - (check them out on my page and hit that support button), I used the Subnautica Wiki as well as my own copy of the game and painstakingly recreated the leviathan skeleton and skull using the LEGO Digital Designer.  As always, I have included links to the pictures I used down below.

Description:  In the murky depths of the Lost River lies the ancient skeleton of a massive leviathan creature.  Not much is known about the creature, but it is (thankfully) extinct and when it was alive, preyed on the Sea Dragon Leviathan.  Now its skeleton remains at the bottom of the Lost River, looming ominously in the glowing green fog of the biome, an awe-inspiring show of colossal power even in death.

NB:  The Leviathan's skull is held in place by double-reinforced technic pins, meaning it is not on a hinge and cannot be closed.  It does not close in the game, and the top half of the jaw is too heavy to be propped up using a mere hinge, so it is fixed permanently in that position.  Hope that's ok with you all.

2. Features the skull of the leviathan as well as 13 pairs of ribs.

3. Includes four pieces of Lost River terrain in between the ribcage.

3. Also includes three River Prowlers as well as a shoal of Spinefish.

Compare:  Here are the links to the wiki pages (scroll down to the gallery to find pictures)

Thanks for checking out this project!  Please check out my other sets on my page as well, which features the survivors of the Degasi in the Jelly Shroom Caves and the wonders of the Safe Shallows! If you're a fan of the game and want this to become a real LEGO set, please support and share with your friends!  More Subnautica sets (including a Ghost Leviathan and a Deep Grand Reef set) coming real soon!