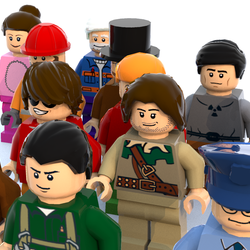 A son has been born and Prince Caspian is about to be killed.  His professor saves his life by a hair right before the telmerine soldiers enter.  Wanting to see what would have happened to him, Prince Caspian jumps in his wardobe and cracks the door open, fully seeing his close fate.  The throne was rightfully his, but his uncle, Miraz, killed his father and when he had a son he ordered Prince Caspian to be killed as well.  After a long ride/chase he soon found safety in the hands of the Narnians.

This set is fully playable and is half open for that purpose.  It includes Prince Caspian and his Professor.

I hope you enjoy this set idea! Please support, follow, and share to see this possibly become a real LEGO set.

For Narnia and For Aslan!!!